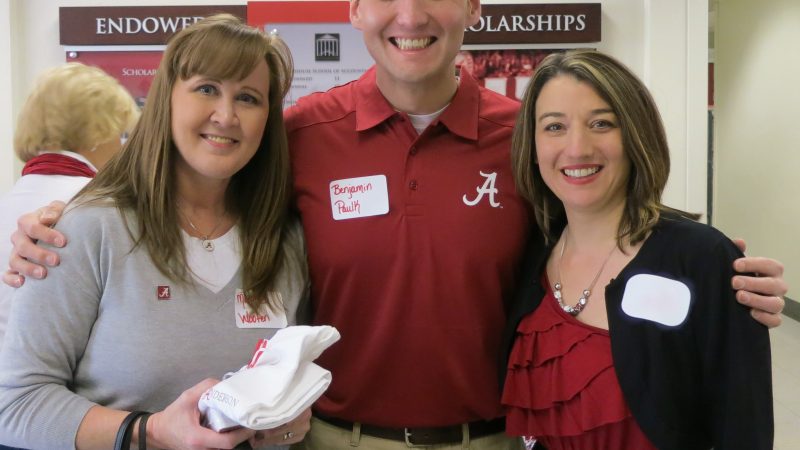 There is nothing that Alabama fans like more than football, except maybe lots of food with football.  We suffer some withdrawal pains if we don’t see some crimson and Houndstooth, spot Big Al somewhere, hear the Million Dollar band, or yell “Roll Tide” at someone.  It’s more than just a game at Alabama. It’s a way of life.

Last Saturday, April 19, Culverhouse College of Commerce EMBA and MBA graduates, arrived in Tuscaloosa to attend the Manderson Graduate School breakfast before the A-Day game.  Alumni and their families received t-shirts, buttons and shakers to cheer on the Alabama Crimson Tide.  Our youngest fan arrived in a stroller and our most senior graduate, Frank Chandler, was from the MBA Class of 1970.

EMBA graduates from the Tuscaloosa and Huntsville programs from 2004-2012, showed up to reminisce and show their team spirit.  Tim Smalley, EMBA Class of 2009, arrived with his son, Drew, who will be graduating from Alabama with an M.B.A. in 2015.  The 2012 class had the most members to attend: Ben Paulk, Michelle Wooten and Allyson Welch.

Check out more pictures from A-Day on Facebook at www.facebook.com/UAEMBA.