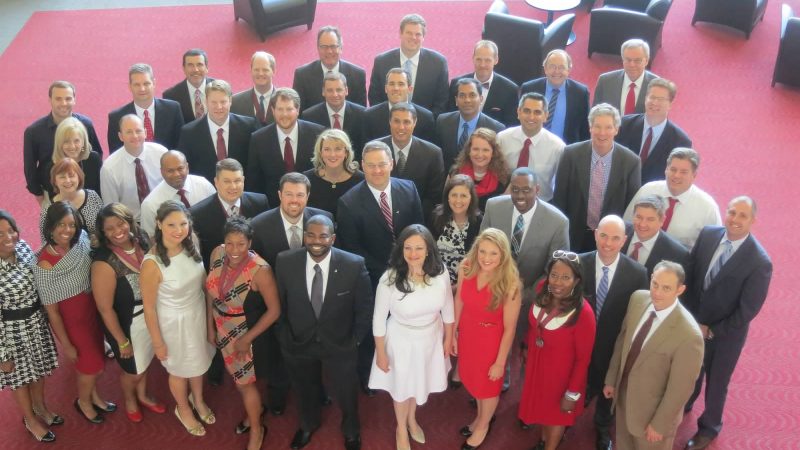 Thirty-eight graduates from the Culverhouse College of Commerce Tuscaloosa and Huntsville EMBA programs at The University of Alabama walked the stage on the morning of Saturday, May 3rd. Surrounded by stunning views of the Walk of Champions and the field,

EMBA staff and faculty joined the graduates and two hundred and sixty-five of their closest friends and family for a banquet in the North Zone of Bryant-Denny Stadium directly after commencement. The event was filled with pride and fond memories as families reconnected over the success of their graduates. After the luncheon and award ceremony, the graduates and their families were given a tour of the stadium including the home team’s locker room, tunnel, and skyboxes.
One of our graduates, Nag Padur, was noticeably absent. His wife was giving birth to their daughter, Eaksha.  Born on her father’s graduation day, Eaksha’s name means “sight,” and can be loosely translated as “knowledge of soul.” Congratulations to the Padur family.

Both the Tuscaloosa and Huntsville classes delivered a Dr. James F. Cashman Faculty Award as well as an EMBA Faculty Excellence Award. The Dr. James F. Cashman Faculty Award honors the memory of the late EMBA Strategy Implementation professor who lived by high standards of integrity and served as a pristine example for his students. The award, given to a faculty member that reflects Dr. Cashman’s positive influence, was presented to Dr. David Mothersbaugh (HEMBA) and Dr. Ronald Dulek (TEMBA). The EMBA Faculty Excellence Award was presented to Dr. Ronald Dulek (HEMBA) and Dr. Brian Gray (TEMBA).

Once again, congratulations to the Executive MBA Class of 2014: